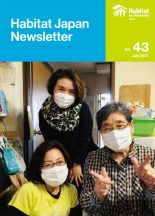 The 39th issue
April/2018
Environmental Conservation and Community Support, SDGs that Come from the Home, Energy and our lives, Project HomeWorks, Introduction of new board chair of Habitat for Humanity Japan, etc