This year marks the 10th anniversary of the Great East Japan Earthquake of March 11, 2011. Habitat Japan engaged in disaster relief and supporting reconstruction for four years, from right after the earthquake to 2015 in Iwate and Miyagi Prefectures. We received the support of people from all over the world who cared about the affected areas, and the cooperation of many volunteers during support activities. First, we started by removing debris from tsunami-damaged houses right after the earthquake. We distributed living supplies to the temporary housings, and public-funded rental accommodations. We provided construction support to improve living conditions, repaired damaged houses and community centers. We held consultation meetings, built fishermen's cabins in affected communities, and set up school bus stops for children who had to commute to distant schools. We continued to take steps one by one with the affected communities while thinking at every moment what we could do and what we should do next. (Click here to see the Habitat Tohoku project)

Even after Habitat Japan's support program ended, student volunteers in Campus Chapters continuously participate in volunteer activities and study tours in the affected areas. Especially, As One, a Habitat Campus Chapter led by students from Tohoku University in Miyagi prefecture continues to regularly participate in local volunteer activities in Miyagi Prefecture. Mr. Toshishige Kikuchi, a senior at the university who served as the representative of As One, told us that he would like to convey his thoughts from Tohoku, in which 10 years has passed since the earthquake struck. 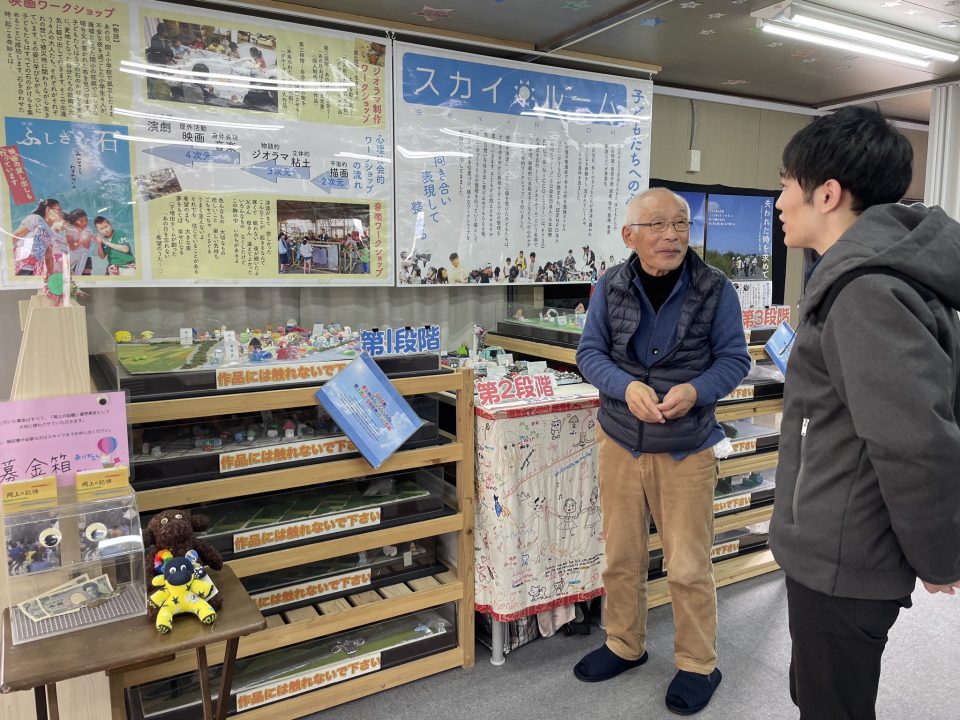 Mr. Kikuchi (on the right) listening to Mr. Kosai (on the left).

I am from Misato Town, Miyagi Prefecture, and I was in the second year of junior high school when the earthquake struck. Misato Town is located inland in Miyagi Prefecture. I was affected by the earthquake, but I don't remember the tsunami. Last month, I visited “Yuriage no Kioku” (Memory of Yuriage), a tsunami memorial museum in Natori City, Miyagi Prefecture, which was severely hit by the tsunami. At the museum I heard Mr. Masayoshi Kosai’s talk. He is a storyteller of tsunami. Mr. Kosai said, "I didn't know much about the tsunami at the time. If I had known how scary it was, I might have been able to talk to people passing by. By learning about the tsunami, we can save lives." He urged that we should learn about the tsunami to protect lives in the future. Mr. Kosai's story, "I was the only one who survived...", made me think of many things.

I participated in various volunteer activities in Miyagi Prefecture with As One members including younger members. At the "Yume House"(Dream House) in Onagawa Town, a facility that Habitat supported and repaired, we did farming with local elderly people. At the "Kokoro no Mori" (Forest of Heart) in Ishinomaki City, we participated in a volunteer activity of tree-planting on land that was damaged by the tsunami. I have talked to a person who had lost a child at Okawa Elementary School in Ishinomaki. The heartache of the bereaved families who lost their children, that will never heal even after many years. I will never forget their stories.

When the earthquake struck ten years ago, I was at my friend’s house and rushed home. I remember how relieved I was when I saw my older brother and older sister who had already returned, and how anxious I felt until my parents returned home from work. Listening to Mr. Kosai's story, I thought back on many things, such as living without electricity, gas, and water supply, and meeting people who were affected by the disaster and volunteers during my volunteer work as a member of As One. And I thought that, as a person who is from Miyagi, I could have conveyed what I saw and heard about the disaster and Tohoku. I could have told many more people who do not know about the disaster, including my Habitat members. I also wondered if I could pass on information and other persons’ thoughts which I learned through meeting a lot of people.

Just as Mr. Kosai taught me the importance of "continuing to communicate," I will pass on to younger members what I found and learned through Habitat activities, and I believe that they will pass it on for the future in their ways.

Many volunteers from all over Japan, including students in Campus Chapters, participated in Habitat's volunteer activities to support the recovery from the Great East Japan Earthquake. The volunteer network established on the occasion of the Great East Japan Earthquake is still being utilized in Project HomeWorks, a domestic housing support program of Habitat, and in repair projects at children's homes, allowing us to continue to provide the housing support needed at that time. We will continue our efforts for safe and secure housing for everyone. We believe that this is what Habitat Japan learned from Tohoku and what we will continue to pass on for the future.