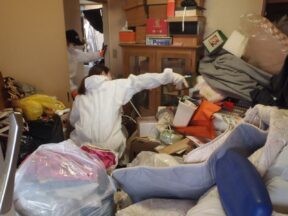 “I saw the floor for the first time in twenty years,” said Ms. Ohno (pseudonym), who has partnered with Habitat Japan to improve her living condition through Project HomeWorks. Ms. Ohno was, as she said, living in an apartment that was so cluttered and she couldn’t walk without stepping on something, and had to climb over several mounds of clutter to go to bed. Due to her mental condition, she could not have thrown clothes, books or other things away for long. They kept piling up until she was surrounded by them.

Ms. Ohno visibly enjoyed communicating with the volunteers while they worked together. She slowly began to talk about herself. “It started out as a way to spite my former husband. I thought he would stay away from the house if I scattered things about and made a mess. Since then, more than decades had passed and the room got like this.”

It was the story which even the social worker who regularly visits her had never heard. And she continued to tell us about her determination to clean up her room. “I have three grandchildren, and the youngest is still in kindergarten. He is scared of me and cries when he sees me.” She paused to rub her body, thin from illness, and said that looking like this and living like this, it’s no wonder. She said that she wants to be a grandmother that her grandchildren will be happy to see. 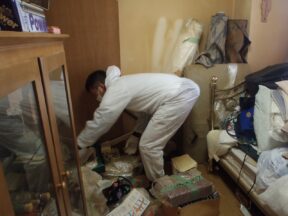 This project was carried out with the fund supported by MetlLife Foundation, which has its headquarters in New York, and the volunteers from MetLife Japan. The volunteer day started with tidying up the bedroom so that she could get to the bed without climbing over mounds of clutter. When the volunteers asked her, “Ms.Ohno, do you want to keep this? Shall we throw this away?” at first she answered that she needed everything. But as she saw her bedroom being gradually cleaned up, she began to change her tune. It turned to “maybe I could get rid of that,” as she made up her mind to let things go. During the time, she made tea and asked volunteers to take a break. It was the interaction with the volunteers, as much as the cleaning, that put Ms. Ohno’s bedroom in order. Also, her daughter and one grandson who had heard that the volunteers were coming, had come from far to help out. When they saw the room getting cleaned, the boy declared “I’m so glad the room is clean now!” to his grandmother, Ms. Ohno and she replied to him in her joy.

Although further cleaning and support will be needed to make her home a safe and decent place to live, the day became to be a very first step for Ms. Ohno to transform her life to build strength, stability and self-reliance with the support of her loved families and volunteers who lent their hands for her.