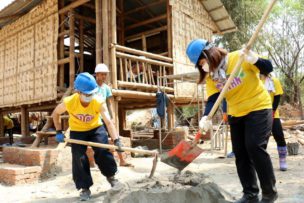 MANILA (March 13, 2018) –  More than 80 volunteers have arrived in Bago region, central Myanmar, for the Asia Build as part of Habitat for Humanity’s  largest youth-focused movement in the Asia-Pacific region. Over at the Pacific Build, volunteers from Australia, New Zealand and the United States will partner with a Fijian family to build a better life through adequate housing. Both builds are part of Habitat’s Young Leaders Build Campaign 2018 that aims to mobilize 4.5 million youths to volunteer, raise funds and speak out for the cause of affordable housing under the theme of PLAY LEAD SHARE.

Over the next two weeks, 74 volunteers from Japan and nine volunteers from Hong Kong will work with Burmese families in Tanatpin township to build eight bamboo houses using local technology. The volunteers will also support the handover of a public sanitation facility, help raise the local awareness of water, sanitation and hygiene practices, and interact with the community through cultural activities.

“It has only been about a year since Habitat Myanmar started building houses and hosting Global Village volunteers in the Bago region,” says Rick Hathaway, Asia-Pacific vice president of Habitat for Humanity International. “We are thankful for the overwhelming volunteer response to Asia Build. We look forward to two weeks full of energy and community transformation as we build strength, stability and self-reliance through shelter.” 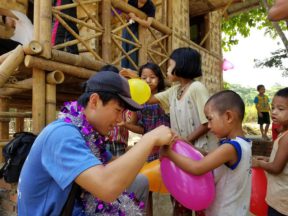 Among those eagerly awaiting for their arrival in Bago is Daw Kyi Win, who will build her house with the volunteers. Since her husband passed away two years ago, she has been relying on her neighbors to repair her house. Due to disability, she is not able to work anymore. She and her three daughters make do with their combined daily earnings of US$7. She says: “We cannot rebuild the house on our own. I am very happy and thankful for the help; it is like a dream for me.”

This year’s Habitat Young Leaders Build will culminate on April 21 with thousands of young people taking part in simultaneous activities across the Asia-Pacific region. Since the launch of the annual campaign in December 2017, initiatives such as the HYLB Leadership Academy and advocacy grants are providing leadership skills training and resources for youth supporters to build a world where everyone has a decent place to live.