Bloomberg, in line with its core value of giving back to the communities has partnered with Habitat in many countries around the world. In Japan, the company has supported Habitat’s activities since the Great East Japan Earthquake. This May and June, a total of twenty volunteers from Bloomberg helped with repairs at two facilities, as well as two households, by participating in Project HomeWorks, Habitat’s domestic housing program that aims to improve people’s living environment by providing cleaning and room decluttering services.

One of those facilities is a shelter for mothers and children in Kanagawa Prefecture, where Habitat, with the support of Bloomberg, repaired a room for a mother and her children last year. The home provides protection and support for mothers facing difficulties raising their children on their own due to various reasons, including domestic violence, financial hardship, and mental and/or physical challenges. The facility aims to support them along their path to the goal of independent living.

The facility was built about a decade ago and has been well-maintained by the staff. In the area dedicated to after-school childcare, however, the wallpaper was partially damaged; Some has peeled off over time, both accidentally and due to the children’s activities. In May, with the help of Bloomberg volunteers, Habitat replaced the damaged wallpaper on two of four walls in the room with a new, colorful one. This work was to provide the children with more spatial comfort, as they engage in more indoor activities due to the pandemic.

When we walked into the room, plenty of illustrations were drawn on the wallpaper. “That was a very special occasion for the children. They usually don't have any chance to draw on such a big canvas, so this experience in itself was another unexpected gift for them”, said the staff, explaining that the facility allowed the children to doodle before removing the old wallpaper. The volunteers first removed the old wallpaper, and then helped to measure and cut and place new wallpaper. While work was being done, some curious children occasionally approached and asked, “What are you doing?” Seeing those children and imagining how they would use the room, all volunteers were greatly motivated, and all steps went smoothly.

"I’m happy that I could see my contribution taking shape.” said Fiona, a Bloomberg’s volunteer coordinator. “It has been two years and a half since we last held an in-person activity with Habitat Japan, but this was such a great opportunity for us to be back with Habitat today.”

Thank you to Bloomberg for your continued help and support. We will continue to serve the most vulnerable children in need, to realize our vision of ‘a world where everyone has a decent place to live.’ 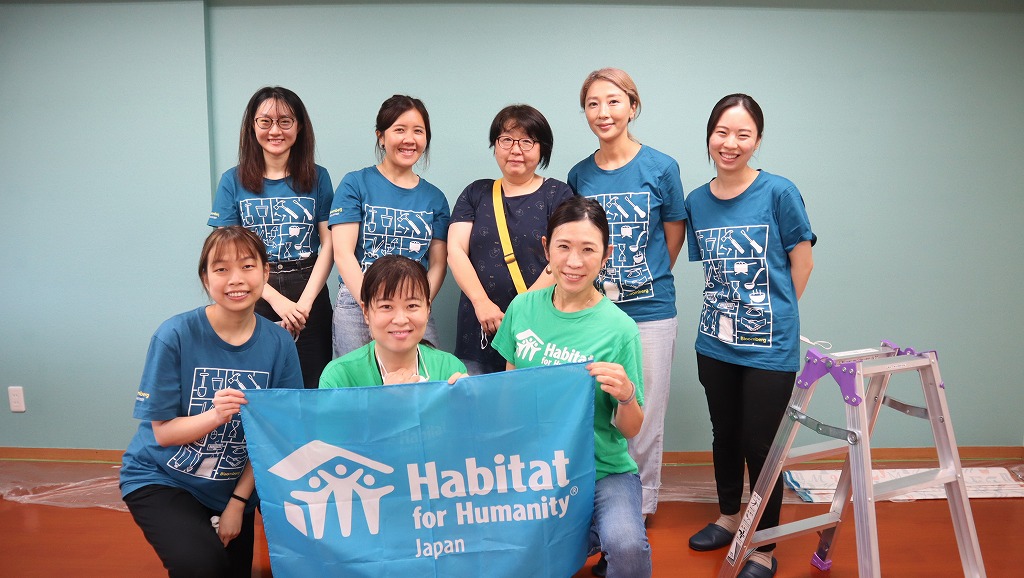